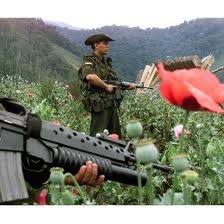 Yesterday the United Nations and a group of 19 panelists announced that the war on drugs has been a complete failure. They noted that the percentage of drug use has only gone up since the “war” began, and crime has skyrocketed because of it. Guess who disagrees with the announcement. You guessed it, Washington D.C.

America has been blamed to be the catalyst for the downward spiraling effect that the so called war on drugs has had on the global community. The crime syndicates that benefit from drug trafficking are clearly in bed with the U.S. government, and Washington turns a blind eye to the fact.

The panelists are targeting the American government and asking for reform to the drug laws, including legalization of certain drugs, and decriminalization of drug users. They said medical treatment and psychiatric help is more useful than jail time and a criminal record. Wow, how come I didn’t think of that?

This is not some shit that nobody knew already. They UN should just ask the Black community in America to be the mascot of this campaign. You know we can’t stand the damn government, and I think any nigga with some sense would stand behind this cause.

I know I’m down with this shit. Shit, motherfucker.

The mind of a black man trapped in a cynical world. END_OF_DOCUMENT_TOKEN_TO_BE_REPLACED
This entry was posted on Thursday, June 2nd, 2011 at 11:19 am and tagged with cocaine, Drugs, failure, legalize, nations, reform, united, war, Washington, Weed and posted in Drugs. You can follow any responses to this entry through the RSS 2.0 feed.
« Herbal Essence “Hazy Rooms”
Nancy Reagan Says Yes To Drugs »